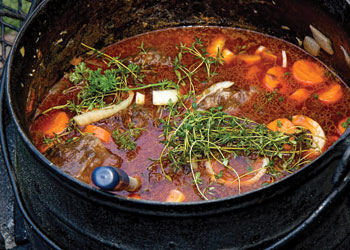 Potluck dinners generally end up having a certain element of randomness that makes it hard to plan around the menu. There's an old folk tale called "Stone Soup" where a wily and very hungry traveler tricks the stingy residents of a town into contributing small amounts of different ingredients to his pot of water. A bit of this for flavor, a bit of that for garnish, and voila! his simple stone, boiled in water, turns into a savory stew to feed the whole crowd.

While the luck-of-the-draw method can sometimes work well for potluck dinner parties, it can also end up with an unbalanced menu. The good news is that it's very easy to turn a mishmash of unrelated food dishes into a great dinner that will be fun for everyone, including the hosts!

Theme potlucks fall into two categories: parties with food that falls under a particular theme (such as those shown below), and themed pockluck events where the food is only one element of the overall event. With organization and planning, either style can be a relatively easy, cost effective, and end up with a fun event with friends.

Find a local caterer in your area. National directory by state and city of catering services and restaurants who cater.

Chef Francis Quinn at Seasoned Catering uses his love of cooking, innovative perspective, attention to detail, and years of experience to provide clients with a one of a kind experience. 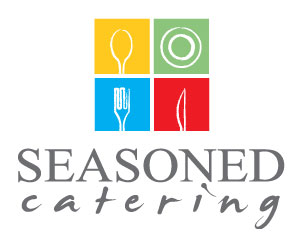